I am a build and infra automation engineer working to become a better all-round developer. This blog is a record of my travels.

In Concrete Mathematics (Graham, Knuth, Patashnik) we have the following preamble and equation 2.20

For example, here is an important rule for combining different sets of indices: If $K$ and $K’$ are any sets of integers, then:

That this would be so was not inuitively obvious to me so I have to visualise it to really get a sense for it. We can see that the above equations are equal by using Venn diagrams. I have illustrated this below; the only difference is I used sets $K1$ and $K2$ instead of just $K$ representing any sets 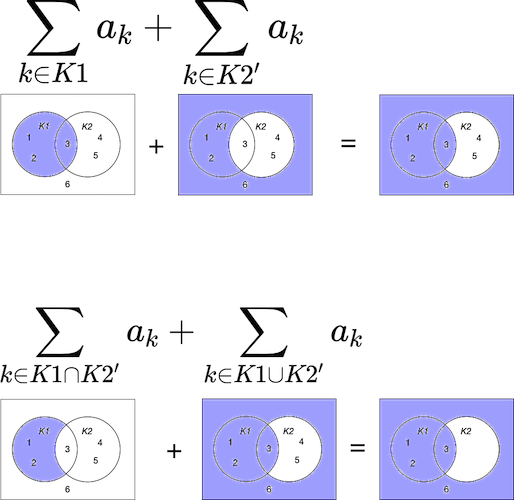 The RHS is equal in both cases.

You may also enjoy

The solution I found to my particular case of “Error: Unreadable module directory” when using Terragrunt.

This concerns the paragraph just before equation 2.9. I will quote it here

As with most of my posts on Concrete Mathematics this is a more verbose outline of the repertoire method in section 2.2. It explains how to find the closed f...